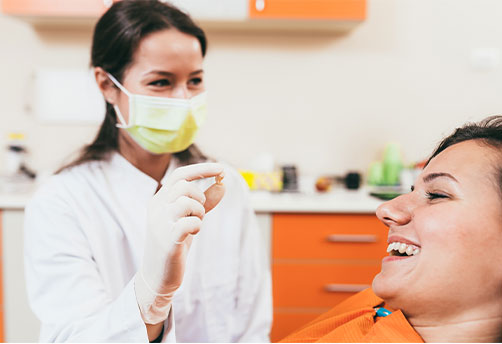 Are an increasing number of labs sending implant and other dental work to China? A recent article by First Coast News claims that a growing number of labs are outsourcing labor to China unbeknownst to dentists and their patients.

According to the report, Chuck Dimaria has been making dental crowns in Missouri for 20 years. “There are laboratories sending implant work to China to be done. I believe that is happening. Do I have any record of it? No,” said Dimaria.

Dimaria says he has received offers to send his lab work to China. He’s resisting that fearing the Chinese dental work quality is too low and the crowns and implants may be tainted.

Faye Lewis is the first confirmed victim in the United States with lead contamination in imported dental crowns. She’s from Ohio but came to Florida to speak in Tallahassee to urge state lawmakers to enact protections for dental patients.

“The teeth that were cemented into my mouth were made in a Chinese Laboratory,” she said.

She also had a bridge in her mouth for 36 days. When she started having problems with it, the dentist took it out and sent it to a lab where it was discovered it had been made in China and was tainted.

Dimaria knows of another case where lab workers found that a Chinese implant was contaminated with fecal bacteria.

There are no laws in place to force dental labs to disclose to dentists where a product was made and what materials were used but that could soon change in Florida. Representative Stan Jordan of Jacksonville is pushing to regulate Chinese dental products.

“It’s very easy for you today to get something made for your mouth that is made in Taiwan or India or the Philippines or wherever and we have no idea what’s in it,” said Jordan.

Both the House and Senate recently passed a measure which contains new consumer protections on dental products. It’s intended to avoid the use of foreign products that may be dangerous.
Source:
Deanna Fene, First Coast News (www.firstcoastnews.com)

Back to Blog Page